I’m estimating the electric deck motors on the robot lawn mower will use about 168A of current collectively, and at 24V that means they consume just over 4kW or 5.3hp of power. Even in a worst case scenario, saying that aloud sounds ridiculous. Really? Where is all of that power going?

So we have a very good handle on angular velocity. The mystery variable in the power equation is then torque. The amount of torque we need when the blade is spinning is going to determine how much power the motors are going to consume.

In my previous power calculations, I made a huge assumption:

I have no clue how much torque a mower blade needs. Let’s just use whatever my 21in Toro push mower outputs. It mows grass pretty good. Close enough.

The engineer in me loves that assumption. Find the appropriate RPM, pull up the power curve for the engine and boom, there’s your torque value on a silver platter.

The problem is that the robot lawn mower and my Briggs and Stratton push mower are two different animals. I should have made this chart a long time ago, but here is the performance curves for the E30-400 electric motor compared to a Briggs and Stratton 450e gasoline engine, typical of a push mower with a 21in wide deck: 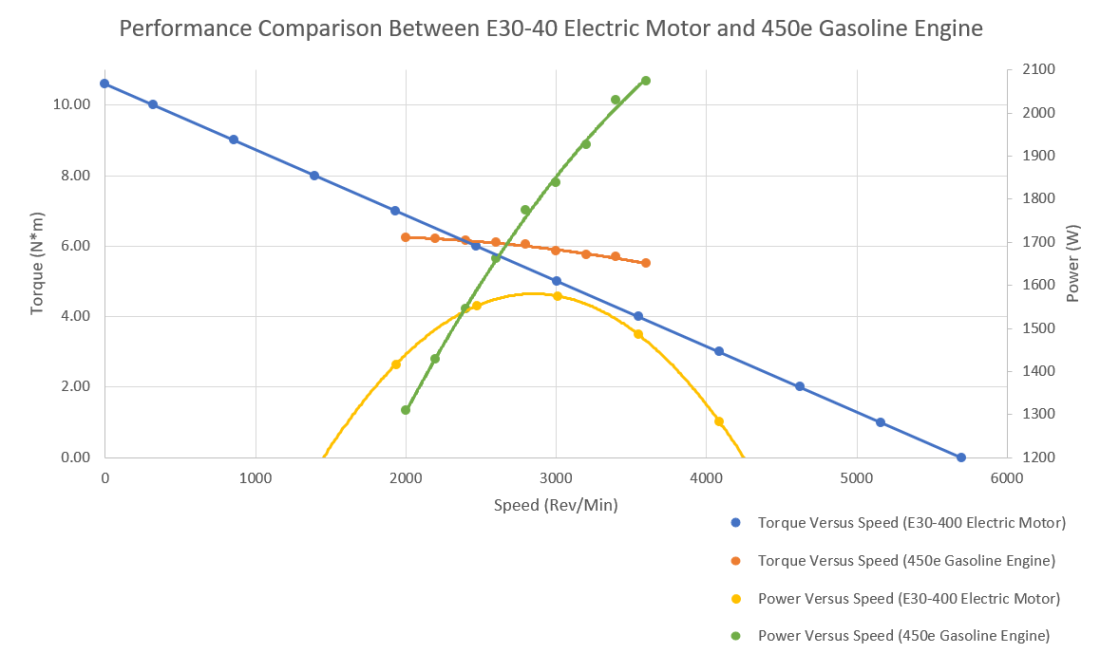 The chart above makes more sense when you remember that the 450e gasoline engine is paired with a 21in long blade, but the robot lawn mower has 12in blades. This is why the electric motor curves go all the way to 5,700RPM whereas the gasoline engine curves end at 3,600RPM. Their respective blade length gets you close to the allowable blade tip speed.

Remember that these curves represent the maximum torque and power created at a given speed. When you’re mowing your lawn, how often does your mower bog down? Not much, hopefully. If it’s designed well and your grass isn’t a foot tall your mower probably isn’t operating at it’s maximum torque or power.

Because you shouldn’t often need the maximum torque or power out of your mower engine, the guys that engineered them installed a cleverly designed throttle governor, which varies the amount of fuel and air fed into the engine in such a way that its speed stays in a narrow RPM band.

Instead of letting the engine spool up to the fastest speed it can achieve under a given load, the governor limits speed of the engine, and subsequent power output, making it more efficient. If you need more torque or power, it adjusts the air and fuel mixture accordingly. The governor also ensures the blade tip speed stays safe.

This is where my power calculations go off the rails. I’m using the maximum torque values from these curves (measured in laboratory conditions no less) and sizing an electric motor such that it can achieve this torque value. This is inflating the estimated current these motors will consume.

Remember the motor from the electric push mower I got off Craigslist? It doesn’t appear quite so undersized now, given that our gasoline engine is likely operating somewhere below those maximum torque and power curves.

Our E30-400 electric motor, on the other hand, has no throttle control. This makes the analysis simple: it will always be operating at the curves on the chart above. A brief look at the chart shows that it should still perform very well.

Under no load, it will spin at 5,700RPM. As the required torque increases, the motor speed will drop, but the total power output from the motor increases until the motor is spinning at 2,900RPM. At this power output, one single motor is almost generating the power created by the 450e gasoline engine. Nice!

So realistically, the 168A of current for all three motors is probably on the high side. By how much, I am unsure. But I suspect it’s a significant amount. The robot lawn mower uses three of these motors. Collectively, I would imagine they won’t need too much torque to spin through whatever resistance they encounter.

This is looking more and more like a problem best solved by experimentation, not analysis…

View all posts by Mr. MowerProject